This story was first published in the Erie Times-News on Sunday, Oct. 30, on Page 14A. It was written by Times-News reporter Baylee DeMuth. Thanks to the newspaper for giving us permission to reprint it in full here. Family photos were provided by our fellow parishioner, Jacklyn Johnson, Matthew’s mother.

To those who knew him, Matthew Johnson was the definition of a social butterfly. 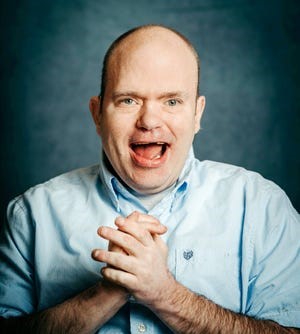 Matthew Johnson, our fellow parishioner,
was the son of Jacklyn Johnson and the
late Wayne Johnson. Matthew died
Sept. 18, 2022, at age 49.

Johnson, of Erie, never thought twice about introducing himself to a stranger if it meant meeting a new friend.

"One of his ambitions was to meet everyone," said Brian Zona, who worked with Johnson at the Barber National Institute before they became friends.

And once he would meet somebody, he would want to know everything about them. "Especially in today’s society where meeting people and getting to know them is maybe not an ambitious thing anymore, it was never lost on Matt," said Zona.

Johnson's mission to become everyone's friend stayed with him until he died at 49 years old on Sept. 18, 2022.

Johnson's caring nature was a key characteristic of his developmental disorder, Smith-Magenis syndrome, a rare chromosomal disorder that is estimated to occur in one of every 25,000 births, according to the National Organization for Rare Disorders. Common symptoms include distinctive facial features, intellectual disability, speech and motor delays and attention-seeking behaviors.

Johnson's death was unrelated to his SMS, said his mother, Jacklyn Johnson.

Matthew Johnson's disorder did not define him.

"Matt, who had a disability, never saw it as a disability," Zona said. "He did everything that anybody else would do living a normal, happy, healthy, adventurous life."

Diagnosed with Smith-Magenis syndrome as an adult 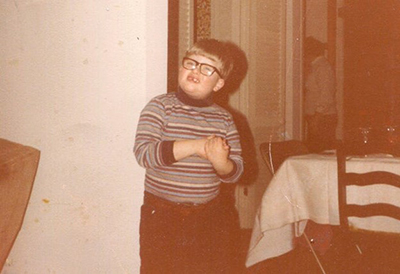 Matthew Johnson as a child, age not certain.

"I used to say, 'Well, is there no one else in the whole world like Matthew Johnson?'" Jacklyn Johnson said.

After that, Jacklyn Johnson took her son to SMS conferences across the country, where they met families who had members with the same condition and doctors who were just beginning to unearth the newly discovered disorder.

"(The doctors) were very helpful. However, because of his age, there wasn’t a lot that they were yet doing with people that age (who were diagnosed with SMS)," Jacklyn Johnson said.

The Johnson family gave Matthew Johnson every opportunity in life.
"We always tried ... to help him lead the life of a typical person," Jacklyn Johnson. "Sometimes he could be a challenge ... and there were behavioral characteristics that were hard to deal with, but he had done so well and we were so proud of him." 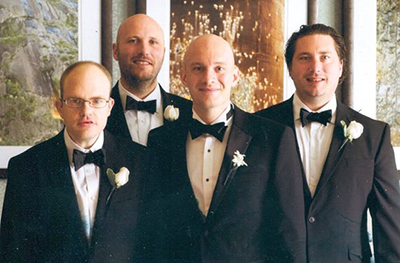 Jeff Johnson, one of Matthew Johnson's younger brothers, remembers the challenges his family faced caring for his brother.

"Initially as a young kid, it was not very easy because of how much attention he (Matthew Johnson) required," Jeff Johnson said. "But I think looking back ... having Matthew as my brother very much helped me develop a lot of patience, a lot of compassion, a lot of understanding."

Despite the challenges his brother's disability brought, Jeff Johnson said he and his other brothers treated Matthew Johnson like anybody else.

"My mom and my father did a great job ... making him part of the family as opposed to excluding him," he said.

The brothers bonded over their love of the Beastie Boys and playing games with the other children in their Glenwood Hills neighborhood. But as much as Matthew Johnson learned from his brothers, they learned from him.

"He had certain phrases or 'Matt-isms' that he would always say and all of my kids say them now," Jeff Johnson said. "My dad would start sneezing and after every sneeze Matt would just bellow, 'One more time' ... just those types of things.

"And he would call me J-E-F-F, and then we would call him M-A-T-T. We would all refer to each other by spelling out our names as kids and then on into adulthood as well.

"I know that for me," Jeff Johnson said, "Living and growing up with Matthew made me a better person, without question. And I think a lot of people who had met Matthew would feel the same way." 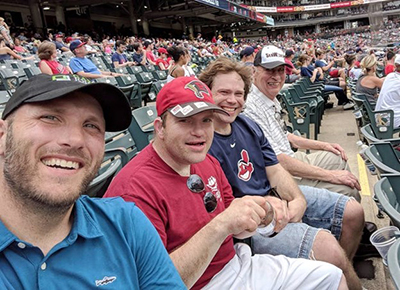 Matthew Johnson's love for people continued through the various activities he grew to enjoy as an adult.

From running on the track at the Glenwood YMCA to horseback riding at the Hope on Horseback Therapeutic Riding Center in Waterford, Matthew Johnson found opportunities to connect with others wherever he went.

"Engaging (with people) was his passion. Matt knew what he liked and he was a formidable man to stop once he knew what he liked," Zona said.
Zona began working with Matthew Johnson as a community aide, a paid position through the Barber National Institute, when he was 18. Because Zona's mother and brother, Mary Robinson and Mike Zona, worked with Matthew Johnson in the past, the two were able to form a quick friendship.
"For years, my family had such a connection with Matt, so all of my family events, Matt was always there," Zona said.

The pair bonded over sports, watching and attending many Cleveland Guardians and Cavaliers and playing basketball together. Zona coached the soccer and basketball teams Matthew Johnson joined in the Special Olympics.

The two of them spent the most time together volunteering with the Barber National Institute's Club Erie, a service designed to help adults with intellectual disabilities acquire, maintain and improve skills while engaging with the community.

He cleaned the fish tanks and filled the bird feeders at the Tom Ridge Environmental Center and Presque Isle State Park; organized clothes and dusted shelves at the Erie City Mission Thrifty Shopper in Girard; helped prepare dinners for the First Presbyterian Church of the Covenant and much more.

To Zona, Matthew Johnson's friendly nature was one of his most memorable traits.

"Matt was the best friend that not only you could ask for, but many people didn’t and Matt still gave them that same affirmation and treatment," he said.