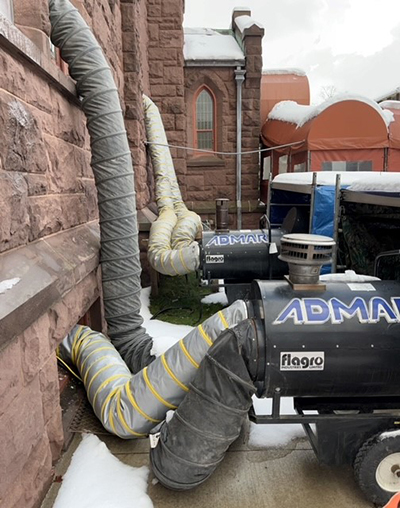 St. Andrew Church is being heated with warm air fed from rented machinery stationed outdoors. The church’s old boiler expired, probably on Oct. 25. It could be spring until a new boiler or boilers are installed.

To answer first questions first: 1) No, the church won’t be chilly during Mass, funerals, weddings or other in-church events if the temporary air blowers work as they have so far. 2) Yes, a new boiler will be costly. 3) And, yes, paying for it will require fundraising and probably some borrowing.

Within days of the boiler failure Martin obtained quotes from two contractors. Our pastor, Father Mark O’Hern, said St. Andrew has since received a third quote. Based on these, the cost to the church is sure to be in the middle five figures.

Martin declined to name the prices publicly, citing courtesy to the companies he spoke to until they have heard from the parish council. The midpoint of those estimates is $53,000. Fr. Mark used the figure $62,000 for the most expensive but quickest solution.

“I think it’s going to be a couple of months” before the building is back to normal, Fr. Mark said.

“It’s a holy season and nobody wants to be thinking about a broken boiler but we have to.”

Starting Tuesday, Nov. 1 (All Saints Day), the church building has been heated by two rented HVAC units parked next to the west door.

Warm air enters through four ducts with the diameters of basketballs. One enters via a stained glass window near the sacristy. One heats the basement crawl space containing the water pipes. Two are aimed into the worship space. Shop fans help distribute the warm air.

The congregation first learned the old boiler had given out from Fr. Mark at Mass on Sunday, Oct. 30. Outdoors it was a sunny Indian summer day, temperatures in the upper 60s, churchgoers arriving in shirtsleeves or windbreakers. Inside, the church was noticeably and strangely cold.

The temporary heaters passed their first four tests of making the church comfortable, those being the All Saints Day celebration, the 11 a.m. Masses of Nov. 6 and 13 and a funeral Nov. 11.

“We had 67 degrees for All Saints Day and 68 degrees for the funeral, which was adequate,” Martin said.

“So worship can go on: That was the most important—and the pipes don’t freeze. Burst pipes—that would be a catastrophe.” 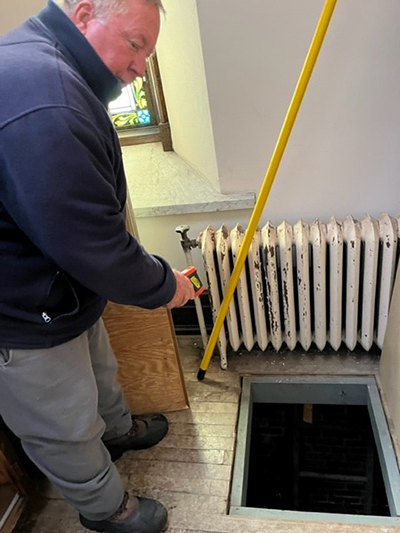 Thursday, Nov. 17, dawned to the first snowstorm of the winter. The temperature had dropped to freezing. A foot of snow had fallen. At 10 a.m. the temperature in the front pew was 64.4 degrees.

From there Martin walked the church high and low, taking readings with a handheld infrared thermometer. It was 51 at the front entrance, 59 in the mother’s room, 58 in the bathroom and 56 down the hatch that leads to the crawl space, the water pipes and eventually to the basement boiler room and a small workroom next to it.

Martin said the church is being kept cooler on weekdays to save money and warmed in time for Mass and special events. The aim is to not let the church fall below 60 degrees when empty and to warm it to 68 or 70 for congregations.

The old boiler could put out one million Btu of heat. Martin said the temporary heaters are capable of 400,000 Btu apiece. Together at full blast they could equal four-fifths of the old boiler.

Martin said the quickest installation of a new boiler would also be the costliest, at least upfront. One company has offered to install a unit of three connected boilers. They could be delivered in a week and put together in a month, he said. Fr. Mark referred to this offer as costing an estimated $62,000.

Over the past 25 years multiple-boiler systems have become more common. Over time It might save St. Andrew money on fuel and related costs because the second and third boilers fire up only when needed.

“The three-boiler system is more expensive but it could be in service within a month,” Martin said.

Fr. Mark said the other two quotes were for conventional single boilers, basically up-to-date replacement models with the same Btu output as the old one. Those offers were within $1,000 of each other and both would cost less than the three-boiler unit.

The drawback is that the parish would have to wait weeks or months for them. Winter might be over before the components arrived.

Martin said the single-boiler contractor he spoke to told him that, because of supply-chain delays, delivery would take 15 to 18 weeks—and he couldn’t even guarantee that. Fr. Mark said HVAC companies are so busy that some wouldn’t even make the church an offer.

Another factor is the cost of the two rental heaters. Winter will have a big say in the final bill but the rentals “are going to have about a $10,000 price tag if we use it till April,” Martin said.

The soonest a decision might come is Monday night, Nov. 21, when parish council is scheduled to meet. The parish finance committee will have decisions to make, too.

St. Andrew will have to foot the bill. Fr. Mark said Biship Lawrence Persico gave his permission to spend the money it takes to replace the boiler. Pastors are required to get the bishop’s go-ahead to spend $10,000 or more, he said. The diocese wants to know, among other things, that the parish council has approved it and that the parish has the money to pay for it.

“It’s unknown what comes next,” Fr. Mark said on Nov. 19, two days before the parish council meeting. “The bottom line is, a conventional boiler is still cheaper.”

A countdown clock is literally ticking toward iGiveCatholic. That is the U.S. Catholic Church’s annual drive for stewardship donations to Catholic schools, parishes and ministries, including St. Andrew Church. The official date is Tuesday, Nov. 29, but iGiveCatholic promotional efforts and an early-giving period are already underway. (For details or to make online donations, click on the iGiveCatholic logo on the St. Andrew homepage.)

Jim Vieira, who chairs the pastoral-parish council, said all of this year’s donations to St. Andrew Church via iGiveCatholic will go toward the new boiler.

“We hoped to make it through one more season, then replace the boiler and maybe add air conditioning,” Vieira said. “Now everything is focused on the new boiler and getting the heat back on.” 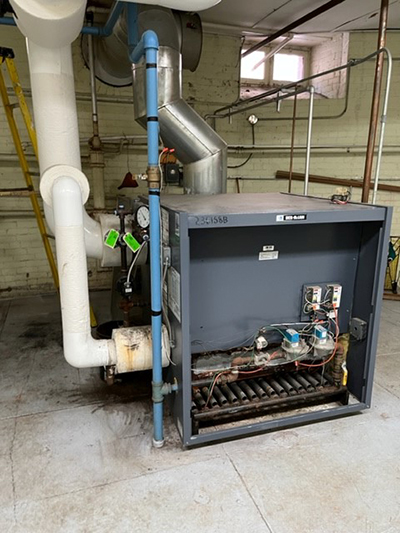 Vieira said the council wants to avoid having to withdraw money from the church’s reserve fund.

“We have a reserve we can utilize if we have to,” he said. “For the new boiler, we thought we might pay one-half and take out a small loan to pay the other half.”

No other iGiveCatholic church projects will go wanting or have to be delayed, he said.

“Nothing else was earmarked. A new boiler was this year’s goal. Now we just have to do it sooner than we would have liked,” he said.

The old cast iron boiler, installed in 2003, had nine sections that functioned essentially as radiators. Martin said at least one of those sections gave out, probably more than one. A rust-colored stain spreads on the basement floor behind the old boiler.

“Jerry has done a great job getting the temporary heat in place in time, then in reaching out to contractors to point us toward a solution,” Fr. Mark said.

Martin blamed himself for trying to coax one more season out of the boiler, only to have it conk out at the start of winter and Advent.

“That, unfortunately, is the sad part.” Martin said. “We knew it was leaking. I made the wrong decision based on the fact it was only 19 years old. It was one of the newer boilers in the parish.”

St. Andrew Church, with its 42-foot-high arched ceiling, measures close to 390,000 cubic feet of worship space alone. Distributing warmth evenly and in time already has become a matter of learning on the go and adjusting to whatever winter brings.

Rich Martin and Frank Necci, the parish maintenance men, have placed insulation around the openings where the air ducts enter the church. Another drafty spot was found Nov. 17 around the stained glass window by the sacristy.

“When they (the portable heaters) are not running they draft cold air. That’s going to be the next fix,” Martin said.

That day Necci was dressed for shoveling snow while working indoors, assembling a shop fan at a basement work table.

“This means a lot of extra work for volunteers and the church staff,” Fr. Mark said. “With temporary heating you almost need someone babysitting things.”